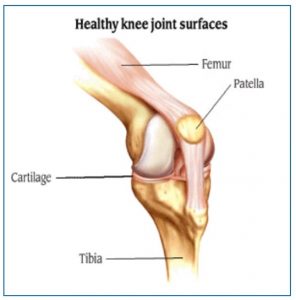 In a healthy knee joint, the surfaces of these bones are very smooth and covered with a tough protective tissue called cartilage. Arthritis causes damage to one or more of the bone surfaces and cartilage where the bones rub together. These damaged surfaces eventually become painful. 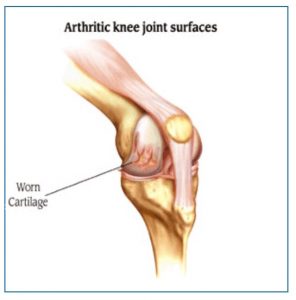 There are many ways to treat the pain caused by arthritis. One way is knee replacement surgery. This is usually considered last, after other methods of treatment have been tried. In knee replacement surgery, the bone surfaces and cartilage that have been damaged by arthritis are removed and replaced with artificial surfaces made of metal and a very durable plastic material. We call these artificial surfaces “implants.”

The decision to have any kind of knee replacement surgery should be made very carefully after consulting your doctor and learning as much as you can about the knee joint, arthritis, and the surgery.

Getting to the Joint

For a partial knee replacement, the patient is first taken into the operating room and given anesthesia. After the anesthesia has taken effect, the skin around the knee is scrubbed thoroughly clean and then swabbed with an antiseptic liquid. The knee is flexed about 90 degrees and the lower portion of the leg, including the foot, is placed in a special device to securely hold it in place during the surgery. A tourniquet is usually applied to the upper portion of the leg to help slow the flow of blood.

An incision is made through the skin, muscle, and other soft tissue until the damaged bone surfaces are exposed. Recent advances in instrumentation and surgical technique have allowed surgeons to perform some partial knee replacements through a much smaller skin incision than those used traditionally. This less-invasive procedure, which is called MIS™ Minimally Invasive Solution, is intended to disrupt less of the soft tissue that surrounds the joint. 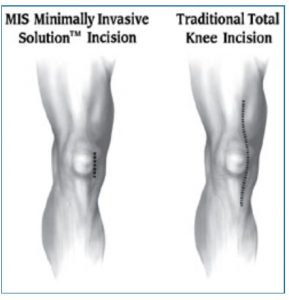 The damaged bone surfaces and cartilage are then removed. Precision guides are used to help make sure that the cuts are made at the correct angles so the bones will align properly after the new surfaces (implants) are attached.

Small amounts of the bone surface are removed from the front, end, and back of the damaged condyle on the femur. This shapes the bone so the implants will fit properly. 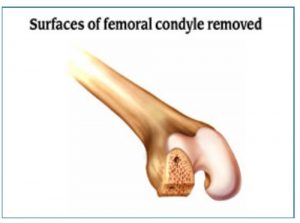 A small portion of the top surface of one side of the tibia is also removed, making the end of the bone flat. 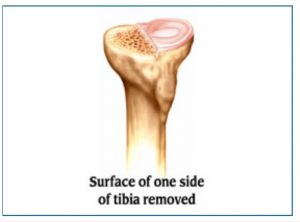 An implant is attached to both of the bones, using a special kind of cement for bones. These implants are shaped so that the knee joint will move in a way that is very similar to the way the joint moved when it was healthy.

The implant that fits over the end of the femur is made of metal. Its surface is rounded and very smooth. 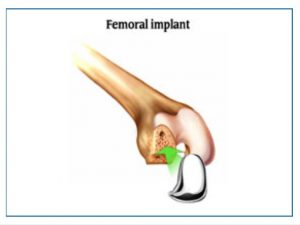 There are two types of implants that fit over the top of the tibia, one consists of two parts. A metal baseplate fits over the part of the bone that was cut flat. The plastic insert is then attached to the baseplate to serve as the articulating surface between the tray and the metal femoral implant that covers the end of the femur. The other type of implant consists of a single piece of plastic that is similar in shape to the metal baseplate and plastic combination. Your doctor will decide which implant is better for you. 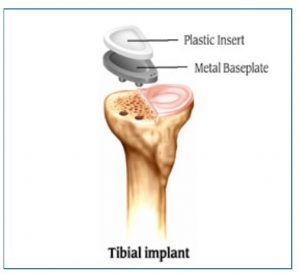 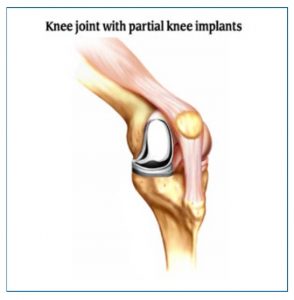 If necessary, the surgeon may adjust the ligaments that surround the knee to achieve the best possible knee function.

When all of the implants are in place, the surgeon sews the layers of tissue back into their proper position. A plastic tube may be inserted into the wound to allow liquids to drain from the site during the first few hours after surgery. The edges of the skin are then sewn together, and the knee is wrapped in a sterile bandage. The patient is then taken to the recovery room.

For over 50 years, OrthoBethesda has provided Maryland with quality orthopedic treatment. Contact us or easily call at (301) 530-1010 to make an appointment with us today!