Robot-assisted surgery is on the rise, with more than 30% of surgeons completing their operations with at least some assistance from a robotic system. This recent increase of robotics in the operating room indicates there may be significant benefits to undergoing robotic surgery. But what surgeries can robots perform, and what is the advantage of robotic surgery?

We’ve compiled a list of the top 10 questions and answers regarding robot-assisted surgery to cover everything from the various types of robotic surgery and robotic surgery vs. traditional surgery.

What Is Robotic Surgery?

Robotic surgery, also known as robot-assisted surgery, is a method of surgery that allows doctors to perform complex surgical procedures with greater precision, control and flexibility than other more conventional surgery methods. Essentially, robotic surgery uses artificial intelligence to provide surgeons with smart robotic tools — mechanical arms with surgical instruments attached to them — that they can manipulate to navigate the body more precisely.

To perform robot-assisted surgery, a surgeon makes small incisions in the body and then inserts the robotic instruments along with a high-definition three-dimensional camera. Based on the high-resolution images relayed by the camera, the surgeon can manipulate the robotic instruments from a nearby console to accurately complete the operation.

Robot-assisted surgery is useful because the robot’s hands are able to bend in any direction to reach areas that are difficult for human hands to reach. Additionally, while the surgeon has full control over the robot’s arms, human hand tremors are not observed during the process, allowing for greater precision than the human hand has on its own.

Robotic surgery is most often associated with minimally invasive surgery, which refers to surgery involving tiny incisions, because the robotic surgical instruments are extremely dexterous and easily directed through small spaces. However, robot-assisted surgery techniques can also be used in certain traditional open surgical procedures.

The concept of robotic surgery may concern some patients who are uncomfortable with the idea of a robot performing surgery. The robot itself is never making any decisions, though. The surgeon must tell the robot what to do throughout every single step of the procedure.

Similar to the way a video game works, the machine translates the surgeon’s movements in real-time as they guide the control console, which exactly mimics the moves the surgeon makes on the screen within the patient’s body. Because the robotic surgical system responds only to directions received from the console, the surgeon is in complete control of the procedure the entire time.

The surgeon, along with other surgical team members, is in the operating room for the whole procedure and can step up to the table and take over for the robot at any time. Although the long hours generally required for in-depth surgical procedures can cause fatigue, robot-assisted surgery allows the surgeon to remain seated comfortably and guide the robot’s hands with ease, increasing the surgeon’s ability to focus and stay as alert as possible throughout the operation.

While scientists began exploring the idea of using robotics for surgery around the 1960s, robotics were not actually used during surgical procedures until the 1980s. In the 1980s, Hap Paul, DVM, and William Bargar, MD, developed an orthopedic image-guided system to assist with prosthetic hip replacement operations.

In 2000, the Food and Drug Administration (FDA) approved robotic surgeries in the United States. Since then, hospitals across the country have gradually begun implementing robotic surgeries as a treatment for a wide variety of conditions.

What Is the Future of Robotic Surgery?

As the field of robotic surgery continues to grow and advance, many forms of robot-assisted surgery are being developed. For example, experiments in nanotechnology have produced promising findings for the future of robotic surgery regarding increased autonomy and decreased patient intrusiveness. In general, developing surgical robotic systems push the boundaries of what was previously thought possible within robot-assisted surgery, proving robotic surgery will undoubtedly play an important role in the medical field for years to come.

What Are the Benefits of Robotic Surgery?

Robotic surgery comes with a wide range of advantages. Below are a few of the main benefits a patient can get from undergoing robotic surgery as opposed to traditional surgery.

In addition, smaller incisions require less poking and prodding of the body, shortening the overall procedure time and allowing the body to begin healing and recovering sooner. Minimally invasive surgical procedures also tend to result in minimal scarring due to the smaller incision sizes. A small scar is a reasonable cosmetic concern for most people that robotic surgery accommodates by making small, keyhole incisions.

One of the main complications involved with traditional surgical procedures is the risk of infection. However, the smaller incisions used with minimally invasive surgery reduces this risk considerably. Instead of cutting open the entire abdominal cavity for an operation, for example, robotic surgery keeps the wound size much smaller and easier to monitor.

Robotic surgery can also minimize the risk of other post-surgery complications, such as joint impingement or excessive blood loss. With less blood loss and fewer blood transfusions, a robot-assisted surgery promotes a fast and full recovery. The generally low complication rate for robotic surgeries and short recovery time results in higher patient satisfaction.

Patients who undergo a robot-assisted joint replacement surgery report that their new joints feel comfortable and natural. Despite struggling with joint pain before the surgery, robotic surgery joint replacement patients experience fewer weight-loading issues after the procedure. This is a notable benefit because weight-loading issues typically lead to further health issues in the spine.

Most patients who receive a joint replacement via robotic surgery have short recovery periods and no problems returning to their pre-surgery routines. Due to the minimally invasive nature of robot-assisted surgery, patients have an increased chance of restoring complete mobility and experiencing total freedom of movement.

What Are the Concerns of Robotic Surgery?

While robotic surgery offers a vast array of benefits, it is not always an option for all patients. Depending on the type of surgery the patient needs, there may be some disadvantages of robotic surgery for their specific situation. Each patient should speak with their doctor about whether robotic surgery is right for their condition before deciding on a procedure.

Most often, robotic surgery gets criticized for not providing surgeons with enough haptic feedback, which is a combination of force feedback and tactile feedback that stimulates the feeling of touch. Haptic feedback is key for helping a surgeon recognize and adjust for applying excessive or inadequate force during surgery. Increased haptic feedback during surgery would allow for improved tissue manipulation and reduced breaking of sutures.

Another possibility to consider when discussing robotic surgery disadvantages is the potential for mechanical failure or malfunction. Although cases of mechanical failure and malfunction during robot-assisted surgery are incredibly rare, these technical difficulties can potentially occur. In these cases, the surgeon must step in and switch to another type of surgery, which may involve larger incisions, a longer procedure time, increased time under anesthesia and an extended recovery period for the patient.

What Can I Expect During Robotic Surgery?

Before the procedure begins, you will be given general anesthesia, which means you will be asleep and pain-free the entire time. During robotic surgery, the surgeon guides the operation from the computer station nearby but does not stand directly over you as they would for a traditional surgical procedure. While each robotic surgery will look a bit different, these are the basic steps your surgeon will follow:

After the surgery, you will be sent to a recovery room to heal from the procedure. Because robotic surgery is a minimally invasive procedure, your recovery period will most likely be short, and you should be able to return to your usual activities fairly quickly.

What Is the Difference Between Robotic and Laparoscopic Surgery?

While a traditional open surgery approach involves making a large incision to perform the procedure, both robotic and laparoscopic surgery use smaller incisions through which the surgeon can insert miniature surgical tools and a camera. The surgeon then uses the images produced by the camera to complete the surgery. Because robotic and laparoscopic surgery both use smaller incisions, both techniques come with the benefits of minimally invasive surgery, such as reduced pain, less blood loss, faster recovery times and smaller scars.

The surgical instruments used for a laparoscopic procedure have a limited range of motion, while the robotic surgery tools are articulated to open and close as well as turn and twist. Additionally, standard laparoscopic surgery uses only one camera that provides a two-dimensional view. The console involved in robotic surgery, however, generates a high-definition, magnified three-dimensional image for the surgeon to view the inside of the patient’s body more accurately.

Whether robotic surgery or laparoscopic surgery is the best choice depends on the type of procedure being performed. In general, robotic surgery is the better mether for working in small, difficult-to-reach spaces because the surgical tools used for robot-assisted surgery offer the highest level of dexterity possible. Robotic surgery instruments are more flexible than a human hand and can rotate a full 360 degrees, allowing the surgeon to be more precise and reach previously inaccessible areas of the patient’s body. 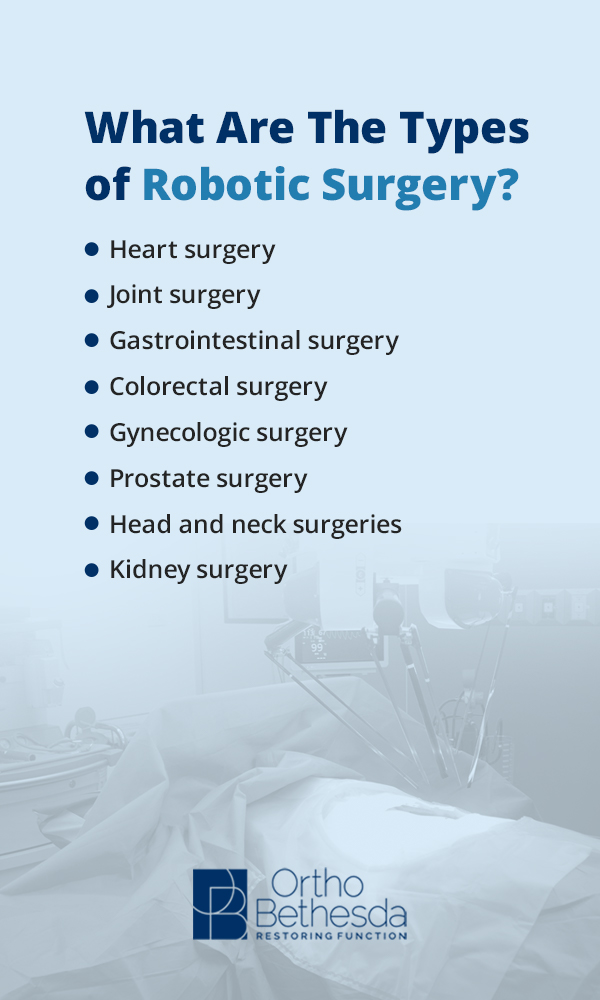 What Are The Types of Robotic Surgery?

Robotic surgery is a viable solution for numerous health issues. From removing damaged organs, such as the appendix, to treating orthopedic conditions like carpal tunnel, robot-assisted surgery is a versatile procedure. The flexibility and dexterity of the robotic tools make robot-assisted surgery suitable for detail-intensive operations like repairing an organ or grafting an artery.

Because the robotic surgical instruments are also able to easily navigate small spaces, robot-assisted surgery is especially useful for more precarious procedures like head or neck surgery. In other cases, robotic surgery can be used instead of conventional surgery as a less invasive alternative so the patient can make a quicker recovery with less scarring.

Some of the main surgeries robots can perform include:

Can Any Doctor Perform Robotic Surgery?

Like any type of surgery, there are potential risks involved with robotic surgery. However, robotic surgery significantly lowers the chance of traditional surgery complications, such as infections, extreme blood loss or organ injuries.

To help you better understand the minimal risks of the procedure, here are some common questions and answers regarding the safety of robotic surgery:

Who Are Good Candidates for Robotic-Assisted Surgery?

Those with the following health conditions should be cautious when considering robotic surgery:

Be sure to consult with your doctor before deciding whether robotic surgery is the right course of action for your health.

Where Can I Learn More About Robotic Surgery?

If you’re considering robotic surgery, find out more about your options from OrthoBethesda. At OrthoBethesda, we specialize in providing top-quality care for the feet, knees, hips, shoulders, elbows, wrists, hands and spine. We offer a wide range of robot-assisted procedures to treat conditions in these areas, such as robotic spinal surgery. Additionally, our reliable robot-assisted joint surgeries include knee replacements and hip replacements.

Each of our highly trained orthopedic surgeons is equipped to create a personalized operation plan for you for optimal results post-surgery. By using robotic surgical instruments, your surgeon can ensure the highest level of precision and accuracy during your procedure. With the help of our caring staff, you’ll receive the best treatment for your condition to make a fast recovery.

To learn more about robotic surgery or to schedule an appointment, contact OrthoBethesda today.