If you look at an X-ray of the average human body from the front or back, you’ll see that the spine is straight. From the side, however, it follows a natural S-curve. Spine problems can occur in a variety of configurations, but if you see this same S-curve from the front, you may be looking at someone with scoliosis.

Scoliosis primarily occurs in children, just before they reach puberty, but it can also occur in adults. While the condition is not typically associated with any pain, it can become severe enough to influence respiratory and heart-related functioning. Scoliosis affects the way the spine curves and has significant influences on adolescent growth, appearance and comfort.

Scoliosis is an abnormal sideways curvature of the spine. It can occur in the cervical, thoracic and lumbar regions. The spine performs many vital tasks, such as positioning our heads above our shoulders, carrying the weight of our torsos and providing shock absorption.

Most cases of scoliosis are idiopathic, which means that we do not know the main cause of it. Because of this, there is no cure for scoliosis. However, there are several options for managing its symptoms.

The signs of scoliosis tend to show up during the growth spurt that occurs just before adolescence, between about 10 and 15 years old. They include characteristics such as:

Most of these symptoms don’t include any pain, but some of the possible complications that can occur with scoliosis include the following.

The American Association of Neurological Surgeons (AANS) reports that scoliosis occurs in about 2 to 3% of the population, mainly in adolescents and older adults. Age is a significant risk factor, as its onset primarily occurs at 10 to 15 years old. The earlier this happens, the more potential a person has for progression and complications since the skeletal structure has more time to grow. Until a child reaches skeletal maturity, progression can occur. Scoliosis can be divided up by age groups, which include:

In all ages, scoliosis is typically managed with close observation, bracing or surgery.

Another risk factor involves the patient’s gender. Both girls and boys are at a similar risk for mild curvature, but at more severe angles, the risk for girls increases significantly. The International Scientific Society on Scoliosis Orthopaedic and Rehabilitation Treatment found that the ratio of affected girls to boys was 1.3:1 for angles 10 to 20 degrees, 5.4:1 for 20 to 30 degrees and 7:1 for more severe cases above 30 degrees. These measurements were taken with the Cobb method, which measures severity by the number of degrees a spine is curved.

With all of this in mind, girls between the ages of 10 and 15 tend to have the highest risk for developing scoliosis, especially if they have a close relative with the condition.

There are many different types of scoliosis, and while the physical form is usually similar, the source can vary, if it is known at all.

We can also differentiate scoliosis types by the area of the spine affected and the shape of the curvature. You may hear the terms “kyphosis” and “lordosis” regarding spine shape, and while these are similar to scoliosis, they are not the same thing. Kyphosis occurs when the spine bends forward when viewed from the side, at the upper back. Lordosis is the condition in which the lower back is overly curved inward. In both instances, the curves occur when you view the body from the side. If looking at it from the front, the spine would still appear straight. Scoliosis generally is visible from the front or back of the body.

Other forms of scoliosis related to the direction of the spine are:

The cause of idiopathic scoliosis is unknown, of course, but in some forms of scoliosis, the reasons are apparent.

For congenital scoliosis, one or more vertebrae are embryologically malformed, and this condition can occur at any part of the spine. These abnormalities can cause curvature and other deformities through several paths. Bones may only partially form, not grow at all, form abnormally or not separate normally. Other curves may develop in response to these changes, as well. The type of abnormalities and their placement can influence the speed at which scoliosis progresses through the child’s lifetime, especially in puberty. Because congenital scoliosis is typically present from birth, it is usually detected at a younger age than idiopathic scoliosis.

Neuromuscular scoliosis develops alongside other neurological or muscular diseases and often progresses more rapidly than idiopathic scoliosis. It is associated with cerebral palsy, muscular dystrophy, spinal muscular atrophy, spinal cord trauma and spina bifida. The Scoliosis Research Society found that the severity of spinal curvature and the likelihood of incidences tend to increase with the degree of neuromuscular involvement.

Degenerative scoliosis commonly occurs in conjunction with conditions of aging, such as arthritis and osteoporosis. Degenerative discs, vertebral compression fractures and previous spinal surgery are other causes for degenerative scoliosis. Some level of degeneration occurs to everyone as we age, but in some, these can accelerate or cause pain.

Learn More About Low Back Pain

A doctor has to have several considerations in mind when diagnosing scoliosis. They must think about spinal maturity, or how much growth the patient has ahead of them, the severity of the curvature, its location and the possibility of curve progression. For example, a patient who exhibits signs of scoliosis but has not yet entered puberty has a significant amount of growth before them. That timeframe is one in which the curve can progress significantly.

The most straightforward approach is the physical exam. The Adam’s Forward Bend Test is a standard method to aid the visual perception of scoliosis. To perform this test, a person leans forward with their feet together, bending 90 degrees at the waist. Any abnormal spine curvature or asymmetry of the trunk becomes much clearer in this position. The examiner can usually identify scoliosis, but not the type or severity. To do that, more advanced tests are needed. 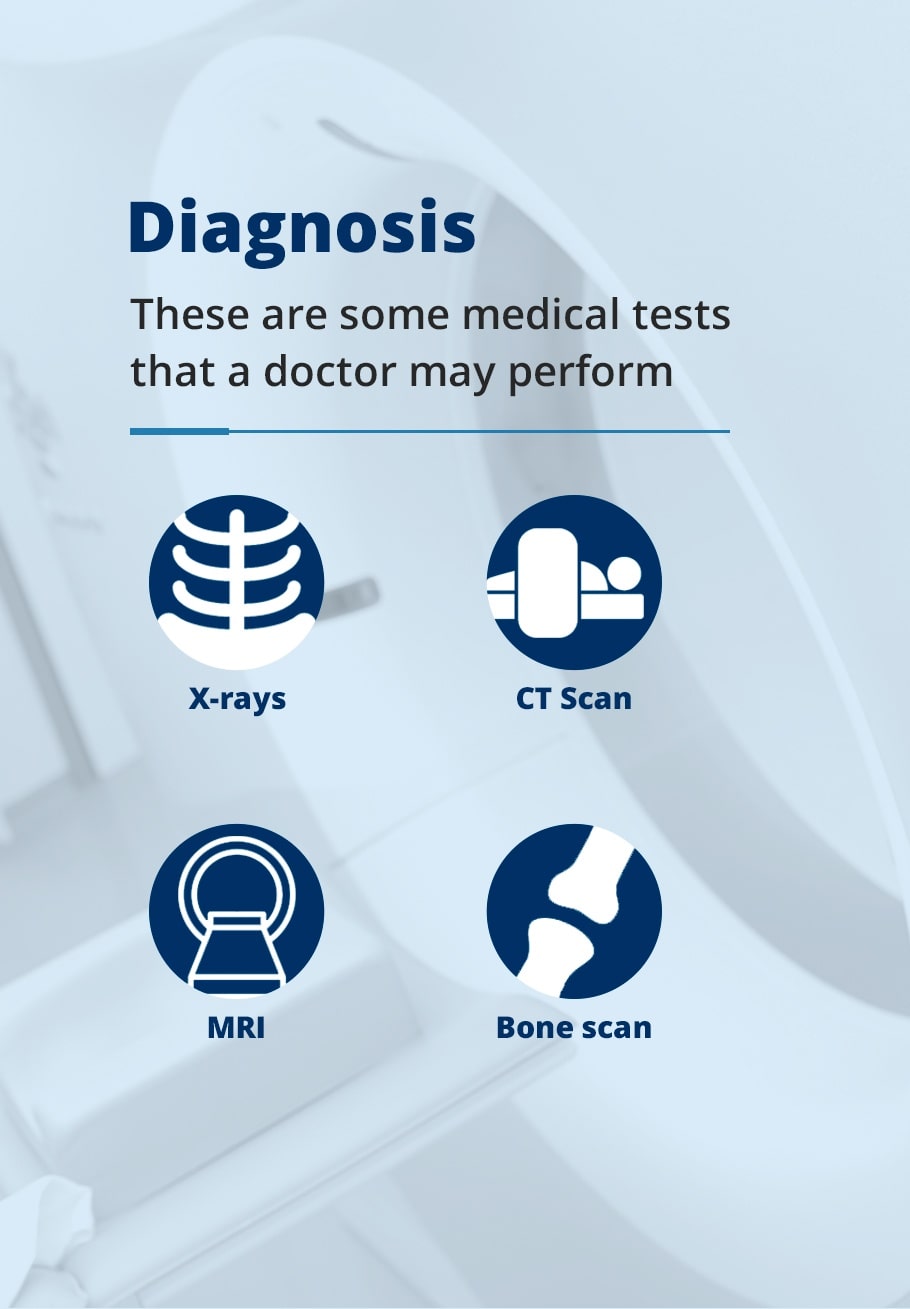 Some of the medical tests that a doctor may perform include the following.

To measure the severity of spinal curvature, many doctors use the Cobb Method. In this approach, a positive diagnosis is based on a curvature greater than 10 degrees on a posterior-anterior radiograph. “Posterior-anterior” refers to the angle at which the image was taken. The posterior view is the back of a person and the anterior is the front. With the Cobb Method, a doctor can measure the degree of a curve and identify its severity based on the results. General severity distinctions are as follows.

Other aspects a doctor may look for include analyses of the patient’s range of motion, reflexes and strength.

Once scoliosis is diagnosed, treatments are relatively straightforward. Simple observation is a way for a practitioner to monitor the condition and see if curvature worsens. Observation is generally needed at all stages but can be especially crucial at early stages to determine the rate of progression. Depending on the time at which it was identified, a brace is a common approach to managing scoliosis. Braces do not straighten curves that have already developed but instead prevent more curvature from occurring. Its effectiveness is dependent on how often the brace is worn. Many children need to wear them day and night. After the bones stop growing and the teen has reached skeletal maturation, they can stop using the brace.

There are a few types of braces in use today, with the most common being the Boston brace. Two other braces that are less common are the Milwaukee brace and the Wilmington brace.

If braces cannot stop scoliosis from progressing or it is particularly severe, the patient may eventually need surgery. The surgery that doctors use the most to fix scoliosis is spinal fusion. In this process, a surgeon fuses the curved vertebrae together, so they become one bone. It uses the help of a bone graft and metal rods to support the fusion and hold the spine in place while the fusion occurs. Bone grafts can come from the patient’s hip, cadavers or artificial materials.

The surgery typically keeps the patient in the hospital for four to seven days and out of school or work for two to four weeks. Most of the time, patients receive strong pain medication, but they can walk when they leave the hospital. After four to six months, the procedure generally does not restrict the patient from participating in activities and sports. For contact sports, six to 12 months is more appropriate.

While exercise can’t reverse scoliosis or prevent it, it can help you develop a healthy back that better promotes good posture and flexibility. These characteristics may allow you some posture correction that can help make scoliosis more manageable. The position of your spine is the basis of good posture. Poor posture can even wear away at your spine, making it more prone to injury. Therefore, exercises that strengthen the back can help you position your spine more appropriately and develop a healthier posture.

Good posture should consist of your shoulders being in line with your hips. Keep the shoulders down and back, with your ears over them. Pull your stomach in and keep your feet about shoulder-width apart. When sitting, make sure your back is adequately supported, with a back pillow or lumbar support structure if you need it. Have your feet touch the floor, and relax your shoulders. Your elbows should be in line with your body, between about 90 and 120 degrees.

Some scoliosis exercises that can strengthen your back and help posture are as follows.

Check with your doctor before starting an exercise routine, as some activities like gymnastics, pilates or yoga include moves and positions that may twist the spine in ways that can worsen scoliosis.

When to See a Doctor

Scoliosis checks are usually a part of regular exams in children. See a doctor if you notice:

If you’re in the Maryland area, OrthoBethesda provides quality orthopedic treatment and physical therapy for scoliosis patients. Our Board-certified and uniquely qualified doctors and surgeons can identify, treat and monitor scoliosis with the utmost care through our Washington Spine and Scoliosis Institute. This organization provides a central location for the treatment of the spectrum of orthopedic spine problems. If you suspect you or your child may have scoliosis, schedule an appointment today.